Take the scare quotes from wine 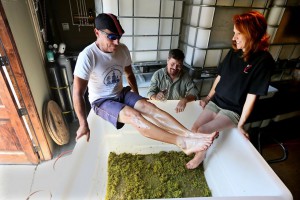 Taking The Scare Quotes From “Wine”

It was late May and there was still light in the sky when we moved from the kitchen to the dining room.  At the same time we moved from the bubbly (with which we toasted my good friend Theresa’s birthday) to an unusual bottle of red wine.  As soon as I poured it from the decanter, everyone stopped eating and talking to look at it, smell it, and taste it.

Then Theresa blurted out, “This ‘wine,’ is like it’s not really wine,” her intonation putting scare quotes around the first use of the word “wine” in her sentence.  That was a revealing observation, one to which I was overly eager to respond, because I had been thinking about the narrowing definition of “wine” for a long time.

“THAT’S a really interesting question,” I said, “and here’s why,” launching into my spiel.

Theresa was sitting across the table from me in my dining room.  Between us was a decanter of Tuderi 2006 from Tenute Dettori in Sardinia.  By contemporary standards, the color of the liquid in the decanter was too light.  That was consistent with what I later learned about the making of this stuff — the grapes had been destemmed but not crushed.  That meant less extraction of color from the skins.  The cast was a brickish red, suggesting some exposure to oxygen, perhaps during the two or three years the juice had spent in cement tanks with little or no addition of the antioxidant, sulfur dioxide.  Its appearance was slightly cloudy (gasp), because it had never been filtered, fined, or clarified.  In fact, it had only been racked once or twice.  (Racking is a process that removes the lees that collect at the bottom of a wine vat.)   Isn’t “wine” supposed to aim for maximum extraction, minimal exposure to oxygen, and perfect clarity?  That’s what the the guys at UC Davis’s school of enology and 99% of all professional winemakers would tell you, but in all of these characteristics — color, cast, clarity — our beverage was missing the mark in terms of enological orthodoxy.  But it didn’t stop there.

The nose was outrageous.  It smelled of slightly burnt, candied orange rinds, potpourri, and mulling spices.  No oaky, creamy sweetness whatsoever.  Drinking it gave an impression of volatile airiness, very low viscosity penetrated by tart cherry and strawberry flavors.  That taste was light, distinctive, and persistent.  The contrast with almost any California red wine at any price was great.  One of these things was not like the others.  And I liked the Tuderi.

As I see it, most modern, new-world wines are so similar that they have narrowed the door of our palate to a keyhole.  Drinking the Tuderi revealed that to me, made it obvious.

That brings us back to Theresa’s comment.  The Tuderi was different enough from the common bottle to provoke comments and conversation all around the table.  It was also so different from every wine Theresa had ever tasted to make her put scare quotes around “wine.”  And yet, 50 years ago, all around the Mediterranean it might have been recognized, not just as “wine” but as a typical wine.  Back then, in many winemaking regions, the methods that the Tenute family uses to produce Tuderi today were utterly conventional.  Now they are revolutionary.  How did this happen?  How did a prototypical wine become “like it’s not really wine?”

I think that, paradoxically, the loss of variety in wine has a lot to do with the nearly universal adoption of good wine-making techniques.  Those techniques have brought benefits.  By many criteria, wine today is better than ever.  Wine that is commercially produced in quantity is rarely spoiled by the common, old culprits of fermentation gone wrong — volatile acidity (vinegar), ethyl acetate (nail varnish smell) or brettanomyces (stink butt).  Modern methods and chemicals have almost banished spoilage in the wine you drink.  Unfortunately, the same methods and chemicals have reduced variety in wine’s appearance, smell, and taste.  They have given the lab technicians, I mean, the winemakers, too much control.  And absolute power corrupts; well, you know the rest.  To the great majority of winemakers, the temptation to harass their wine with chemicals and processes and additives until it becomes a homogeneous ideal beverage is irresistible.  Sad. No doubt this often makes for high-quality beverages, but there’s that keyhole problem — many of them taste sort of the same.

If you want to stop tasting through a keyhole and open the door of your palate, all is not lost.  You can seek out the apostates, the radicals, the freaks, the grouchy old peasants, and the young iconoclasts.

The rules of modern winemaking are made to be broken.  Most famously Tenute Dettori breaks them in Sardinia, Frank Cornelissen breaks them on Mount Etna, a couple of people are even breaking them here in San Diego, scores of producers seem to be breaking them in the Loire Valley.  Admittedly, the results are mixed.  That’s a good thing.