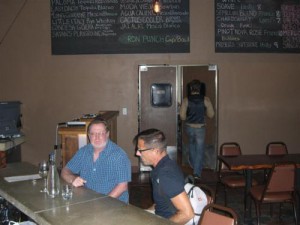 I begged Sara and Markus to let me guest blog, because I like their posts and because I have a message for the San Diegans who read them.  Sara and Markus assented.  But don’t worry; they’ll be back and blogging soon.

“WTH?” you ask.  (That’s “what the heck,” because I’m trying to avoid outright profanity, even in online acronyms.)  That’s right.  Drink local!  There are as many good reasons to drink local wine as to eat local food, maybe more.

A lot of you are trying to be locavores or at least locavorish.  There are some good and familiar reasons to eat local.  An incomplete list might include keeping small farmers in business, reducing the use of fossil fuels (although there’s some debate about that), eating produce that you can’t get from distant factory farms because it does not travel well (thereby increasing the variety in your diet), and getting food that is fresher and less processed because it does not have to travel.

The new farm-to-table restaurants in San Diego are a visible sign that people like to eat local.  I love places like The Linkery, El Take It Easy, and Sea Rocket, not because I’m a strict locavore but because their insistence on local produce correlates with their insistence on using the best ingredients.  Their aim is to make something authentic.  Authenticity comes from ingredients obtained with care, processed with care, and served with care.

How do you get the same qualities in wine that you get with good, local produce — more variety, less CO2 (except in sparklers), less processing, fresher?

A couple of experiences I had answered that question for me.  First was what I call “the Ventoux phenomenon.”  The French Cotes du Ventoux region is a lesser-known part of the Rhone region.  When I lived in Paris in the 80s and 90s, you could buy Ventoux wines in the capital, but why would you?  They were thin, reedy, and without character.  Then, shortly after moving to San Diego, my wife and I were vacationing at the foot of Mont Ventoux for the scenery and the food and the mountains, not for the wine.  It’s kind of funny that I cross the Atlantic to vacation in the Vaucluse part of Provence, because the countryside there looks and feels an awful lot like San Diego’s back country, beautiful and aromatic and great for viticulture.  We were staying not far from a local wine co-op.  We dropped in for a taste.  It was just the local no-name Ventoux.  The stuff was delicious — tart, fruity, fresh, crunchy, like bursting berries on the palate.  It came out of a hose attached to a thirty-foot-tall tank built into the walls of the co-op.  And, get this: if you brought your own bottles, it cost 1 Euro per liter.  That’s about a dollar a bottle.

“WTF!” I exclaimed, because that was before I swore off swearing.  “Why don’t we get this stuff in San Diego or even Paris?!!?”  I have since learned that there are a few good reasons, and I will get to them later.

The second experience that taught me to drink local was making my own wine.  I have been doing so in San Diego for about eight years and went commercial under the label “Los Pilares” with last year’s vintage.  Here’s the deal:  smaller and localer makes it easier to be betterer.  Repeat with more emphasis and even less grammar:  more smaller and localer makes it more easier to be more betterer.

I have become convinced that I get wine grapes locally of a quality that famous commercial winemakers who charge $100 per bottle would kill for.  But of course they would need tens or hundreds of tons of it, and that is just not available.  My experience with high-quality local fruit is just one example of how easy it is to make good, interesting wine locally on a small scale in San Diego.

You, my neighbors, are really in luck, because San Diego is a grape-growing region.  You can experience the benefits of local wine making without leaving home.  Unfortunately, many (maybe even most) local wineries do not make any effort to exploit the benefits of being small and local.  They do EXACTLY what they shouldn’t.  They limit themselves to “international” varietals like Cabernet Sauvignon, Merlot, Pinor Noir, and Chardonnay.  They use industrial wine-making techniques.  They import their fruit from the central coast and even places farther afield.  Come on guys!  Why even make wine in San Diego if you are trucking fruit in from the central coast?

So, I changed my mind; I have two messages for San Diego foodies, especially the locavores:  (1) Drink local wine.  (2) Encourage local wineries to use local fruit and to bring you all the benefits of being small and local.